Linda Paltrineri has been directing musicals at The Sandwich Public Schools since 1987 when her first class of second graders performed “You’re a Good Man, Charlie Brown.”

Since then the students at The Forestdale School have had the opportunity to act in musicals such as “Beauty and the Beast,” “Charlotte’s Web,” and “The Wizard of Oz.”  Each year the students look forward to acting on the stage and learning about theater in an after school program.

Four years ago, The Forestdale School librarian, Sarah Hannegan, approached Miss Paltrineri about directing a Shakespeare play with the fourth grade students.  In library class she was teaching them about Shakespeare and reading excerpts from “Hamlet” as well as exploring the origins of his ideas and writing.

Miss Paltrineri held auditions for the nine year olds who learned the dialogue and plot of “Hamlet” quite readily.  They performed “Hamlet” that year for all of the Forestdale students.

The following year, those same students expressed interest in learning more Shakespeare and so they learned and performed “Romeo and Juliet.”

This year the 5th grade after school drama club will perform, “As You Like It,” a comedy by William Shakespeare. Though the students loved the action and drama of the past two shows, both being Shakespeare tragedies, they are superb in this year’s comedy.

Everyone is invited to attend any of the performances at The Forestdale School Multipurpose Room on Jan 13th at 2:15pm, or Jan 14th at 9:30am or 6:00pm. 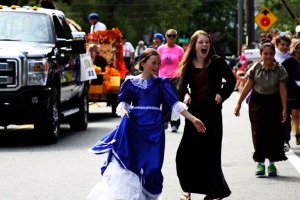 Forestdale shared their excitement about being Shakespearean actors by marching in the Sandwich 375 Parade!  And they won a prize for best youth float! 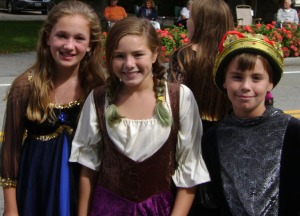