Second grade Scientists exploring the marsh with Naturalists and teachers...

Second graders appreciating one of the most amazing habitats in the world… our Cape Cod salt marshes. Full of life and breathtakingly beautiful…. Here they are hoping for a glimpse of a Great Blue Heron.

Second Grade has been studying Habitats and Interdependence in Life Science this year.

We started our study with a unit about the Cape Cod salt marshes.  We learned what animals need for survival in this habitat, as well as how the animals and the land all depend on each other for survival.  This was culminated by a field trip to Scorton Creek to observe the salt marsh habitat.

Then each second grade class chose a secondary biome as a unit of study to see how the students could transfer their knowledge of habitats, interdependence, and food chains/webs. The four biomes that were decided on among our four classes, were:  tropical rainforest, desert, arctic tundra,  and coral reef.

Mrs. Tompkins’ class focused on the Sonoran Desert in the United States. A desert habitat is a very dry climate.  It usually rains less than 12 inches each year.  One third of the earth is covered by deserts.  Day and night are very different in the desert.  During the day the temperature can get very hot and many of the animals stay cool in burrows or nests.  At night the temperature can get much cooler and that is when many of the animals come out and look for food.  The plants and animals have special ways to survive or adapt to life in the desert. 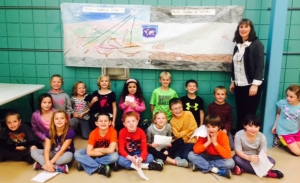 Mrs. Gill’s class learned about the arctic tundra. We learned that the tundra is a cold, dry, windy habitat. The plants and animals that live there have adapted to live there. Plants grow close to the ground and some even have hairs on them to help them survive. Animals do different things to survive in the tundra in the winter. Some animals migrate to warmer places. Some animals hibernate to survive in the winter. Other animals grow extra fur to stay warm and stay on the tundra all winter.  Some animals change the color of their fur to camouflage with their surroundings. We liked learning all about the arctic tundra.

Mrs. McAdams’ Class studied the Coral Reef and proudly presented their mural and shared information with the other second grades. Beautiful!

Mrs. McAdams’ class completed a Unit of Study on Coral Reefs. We specifically studied the Great Barrier Reef, off of the coast of Australia. In addition to learning about the natural beauty and mysteries of the Great Barrier Reef, each child researched a specific animal that is native to the reefs. As a culminating activity the students created a beautiful mural depicting life in the coral reefs. Some of the main ideas that the children took from the study are as follows…

• It can be seen from outer space!

There are sentences around the mural with important facts about the coral reef.